Ralph Steadman is a world-renowned cartoonist and caricaturist. Originally labeled a ‘gonzo’ artist, he made his name by providing the illustrations for Hunter S. Thompson’s Fear and Loathing in Las Vegas, and later his Fear and Loathing on the Campaign Trail ’72. Since then, Ralph has provided illustrations for collections of poetry by Ted Hughes, Alice in Wonderland and Animal Farm.

Ceri Levy is a film-maker who started out making music videos before moving into documentaries. His works include Bananaz, a film about the group Gorillaz, and The Bird Effect, which saw him immersed in the natural world, an experience that affected him so much that he upped and left the city to live in the wilds of Rutland.

In this Q&A, the Charter for Animal Compassion asks Ceri about Critical Critters – the third in a trilogy of books written with Ralph Steadman, following on from Extinct Boids and Nextinction, featuring nonsense beasts, irreverent jokes, and around 100 illustrations by Ralph of critically endangered mammals, insects, fish, lizards and trees.

All the images on this page are Ralph’s, from Critical Critters.

Charter: What events led you and Ralph to collaborate?

CL: In 2011, I was organising an exhibition highlighting the dangers of extinction faced by many of the world’s birds and had chosen a selection of my favourite artists that I wanted to draw an extinct species for the show. A friend gave me a contact email for Ralph and I sent him an email.  After a month or so I had just about given up hope when an email dropped in my inbox. In it Ralph wrote, “I have no idea what you want from me but it sounds intriguing!” And that, as they say, was that. We got on well and without realising it found we were working together and had become a team. Three books on and it still feels fresh and exciting. And it makes us both laugh and we both love to laugh! Laughter is the key to dealing with the serious subjects and issues we are presenting in our work. We are just two Gonzovationists, alternative conservationists, who are trying to make a little difference.

Charter: What do you hope to achieve with Extinct Boids, Nextinction, and Critical Critters?

CL: I hope that we can make people aware of the dreadful plight faced by so many species today. But perhaps we can lead people to this realisation with a smile on their faces before they understand the terrible implications of what we are saying. Ultimately I hope that readers will feel inspired to find out how they can help save our wildlife from extinction and maybe they too will become Gonzovationists! I would like to say that it’s never too late but I’m afraid for some species such as the Vaquita, it probably is. We need to find a way to help the many other species that face a possible extinction. There are so many wonderful people out there committing themselves to the cause and they desperately need our help. People ask “But what can I do?” Well, start by picking a favourite endangered animal and have a look online to find the relevant organisation that is doing their utmost to help that species. They will have advice on how to help.

Charter: How did you go about choosing which animals to include in Critical Critters?

CL: I made a horrid list of animals that were Critically Endangered and we went from there. Ralph hates my lists but they are a necessary evil to make sure that we covered all the big hitters of the animal kingdom. We didn’t want to leave any animal off the Critical Critters Ark. And I think, begrudgingly, Ralph actually appreciates my lists. I can’t really speak on his behalf on this one but I’m having a go! Lists work and this one kept us focused. I compiled the list by doing a lot of research from books and websites and found the IUCN website particularly helpful and informative. It proved an invaluable resource.

Charter: This is your third joint publication – do you and Ralph have any plans to collaborate in future?

Absolutely! We have been considering possible next steps. This week we are seeing if there is any mileage in A Bumper Book of Manhole Covers. We don’t think it’s been done before.

I guess the next logical move would to create a book about Gonzovation in general, perhaps with the title of I’m a Gonzovationist. That’s what we’re working on as we enjoy working together and I think both of us would be loathe to stop our stuff and nonsense now. After all we never thought we would have The Gonzovation Trilogy and what’s to stop us turning that into a Quadrology. I think that’s what it would become and then a Quintology? And after that…

Critical Critters by Ceri Levy and Ralph Steadman is available from Bloomsbury: https://www.bloomsbury.com/uk/critical-critters-9781472936721/ 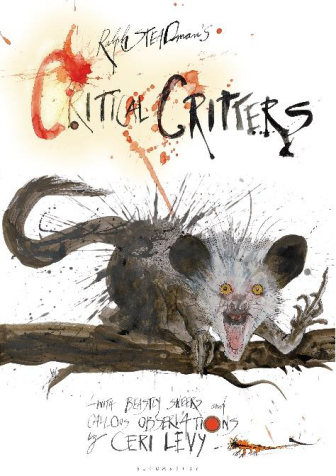